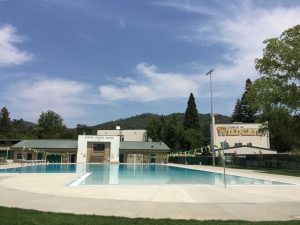 Sonora, CA — Final tweaks to plans to maximize public use of the Sonora High School pool over the summer break will be discussed by the trustees Tuesday.

According to Sonora Union High School District Superintendent Pat Chabot, following a noontime meeting Monday with Tuolumne County Recreation Department officials, a cooperative schedule has been mostly ironed out. It did not come without challenges, he recounts, as on Monday morning a scheduling conflict became apparent when water polo teams and Rec Department lifeguards in training both showed up at the same time to use the facility.

“This is the first time that we have had this big a pool and the Rec Department and school district are trying to figure out exactly what is going to happen and we are going to work together on it,” Chabot says affably. Although not as deep as the old six-lane pool, which is too bad of shape to keep using in tandem, the school’s new pool has 11 lanes and has the capacity to accommodate somewhat more activities at once.

Rec Department officials and Chabot went over proposed changes to the contract for county counsel’s consideration as well as the final schedule in order to make sure there would not be any additional hiccups. Chabot says he anticipates the trustees will grant final approval at their meeting.

As it stands, summertime boys and girls varsity water polo practices will take place Monday through Thursday evenings and Saturday mornings. The JV teams’ practice times there are still being worked out, according to Chabot. He adds that they may also wind up holding some practices at Sonora Sports and Fitness, something the district has done in the past but hoped to eliminate. “We were kind of hoping we could be able to do some of our practices when the Rec Department is in there but it is going to be difficult…especially during lessons because there is a lot of whistle blowing,” he admits.

He says it all depends on how popular the new pool will be with the public such as for lap swimming. “The Rec Department is planning on having lap swimming from 8 o’clock in the morning until 1 o’clock in the afternoon Monday through Thursday and we don’t know if it is going to be two lanes or four lanes…we are going to monitor it during the month of June and see what happens and maybe if it is not being used as much as we think…our [JV] Water Polo team can get in there and practice in some of the lanes,” he confides. He emphasizes that the district is trying to maximize public access and use, also noting, “We are hoping that a lot of people will be using the lanes for lap swimming.”

Other public use times include rec swim Monday through Thursday from 1 to 4 p.m. and swim lessons from 4:15 to 5:45 p.m.; Friday, lap swim time runs from noon until 1 p.m. and rec swim from then until 4. Saturdays, beginning at 1 p.m. after water polo team practice and Sundays before 6 p.m. the pool can be rented through the Rec Department. Sunday evenings from 6 to 9 p.m. are reserved for Family Night.

More about all the local pools in the Mother Lode is here.