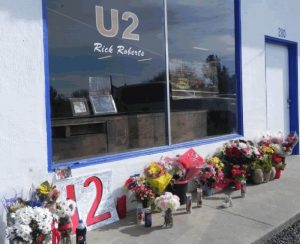 Sonora, CA – It was the site of the notorious 2014 Rick Roberts murder in his auto shop in Sonora, reported here, and is now the scene of an attempted robbery.

Sonora Police Chief Turu VanderWiel tells Clarke Broadcasting that officers were called to the newly opened mechanic shop on 280 Mono Way Monday around 6:30 p.m. for a report of a fight. Once on the scene, the owner of the new mechanic shop told officers he was attacked repeatedly by 27-year-old Daenon Brewer after they argued over cigarettes. Brewer eventually took off after stealing some cigarettes, according to the owner.

Chief VanderWiel relays that while officers were taking the victim’s statement, Brewer walked into the shop. Upon seeing the officers he ran off and headed along Truckenmiller Road about 250 yards before being caught. Brewer was not injured in the fight, but the victim suffered minor injuries, according to Chief VanderWiel, who reveals the victim and Brewer knew each other. Brewer, who was already on parole, was arrested for attempted robbery and resisting arrest. His bail was set at $25,000.

Of note, Cheryl Lynn Lucero of Twain Harte was found guilty of shooting Roberts and sentenced to 50 years to life as reported here.