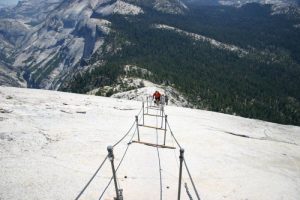 Yosemite, CA – Yosemite National Park officials have confirmed the name of a hiker that plunged to his death last week, but it is still unclear what caused him to fall from the Half Dome cables.

Park spokesperson Jamie Richards tells Clarke Broadcasting, “There is still an ongoing investigation to help understand exactly what happened to cause the fall. What we know at this time is that the person who fell, his name is Asish Penugonda. He was living here in the United States, but he was a native of India. This is a tragedy and our thoughts are certainly with his family and friends.”

Penugonda was 29-years-old and was living in New York, according to Richards. As reported here, the victim was hiking with another person a week ago Monday during thunder storms in the area that created wet conditions on the rock. Richard shares that his fellow hiker, who was not injured,  was contacted by rescue crews at the base of the cables and a search began from there. Penugonda body was recovered the following day around 1 p.m. Richards reports, “The body of Mr. Penugonda was taken out of the park and I believe arrangements are being made, the park is not involved in that.” She did not have any information on whether an autopsy had been performed to determine the exact cause of death.