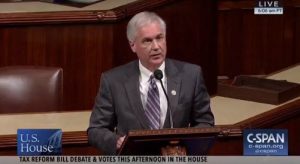 Washington, DC — District Four Congressman Tom McClintock praised the final version of the GOP’s “Tax Cuts and Jobs Act” bill on the House floor before today’s 227 to 203 party line vote to pass it.

As reported here earlier this month, McClintock originally voted “no” on the House version of the tax reform bill, but today thanked party leaders for heeding concerns regarding the loss of broad-based deductions like state and local taxes.  He noted, “The final product “exceeds my expectations, and on behalf of California taxpayers I can now offer my enthusiastic support.”

McClintock backed up his decision to switch his vote using this example:

I opposed the House version of the tax reform bill because the loss of broad-based deductions like state and local taxes would have caused significant tax increases on many of my middle-class constituents in the high-tax, high-cost state of California.  It increased the marginal tax rate on high income earners and abolished life-line deductions such as casualty loss, medical expenses and student interest.  I urged that we should leave no taxpayer behind.

I want to thank Chairman Brady, the Republican Leadership and the conference committee for heeding these concerns.  Their final product exceeds my expectations, and on behalf of California taxpayers I can now offer my enthusiastic support.

The new version leaves the casualty loss, medical expense and student interest deductions intact.  No family needs to fear being ruined by taxes after a major declared disaster or illness, and graduates can continue to plan their lives knowing interest on their student loans will not be taxed.  The new bill eases the proposed limit on mortgage interest deductions and allows up to $10,000 of state and local taxes to be deducted – all important improvements for Californians.

Most importantly, the lower tax rates in this bill now more than compensate in almost every case for the remaining limits on state and local tax and mortgage interest deductions.  Even taxpayers who lose tens of thousands of dollars of deductions will still pay lower taxes than they do today.

The business tax provisions are especially important, because they will restore American workers to an internationally competitive position.  According to economists ranging from Martin Feldstein to Arthur Laffer, these provisions alone will produce $5 trillion of new economic activity over the next decade – that’s $40,000 per household — including $2 trillion of new tax revenues to all levels of government.

Last Friday I toured AMPAC, a local company making the active ingredient in several cancer and epilepsy drugs.  Their product is then shipped to Ireland to make the actual medicine because the corporate tax in the United States is 35 percent and in Ireland it’s just 12 ½ percent.  Their CEO, Aslam Malik, told me that if they gave their product away for free, the final medicine could still not be competitively manufactured in the United States – solely because of our taxes.  He expects their local company will grow dramatically because of this tax reform – employing hundreds more families both directly and indirectly as they expand everything from payroll to infrastructure.

That’s what the Marxists just don’t understand.  Businesses don’t pay business taxes.  Businesses collect business taxes from just three sources: from consumers through higher prices; from employees through lower wages, and from investors through lower earnings – usually pension plans and IRAs.  We have the highest corporate tax in the industrialized world, and commerce and capital simply move around it – leaving our workers behind.  That’s one of the reasons why we averaged 1 ½ percent under Obama – worse than any President since Herbert Hoover – and lost an entire decade of prosperity.

The Marxists tell us that this is just trickle-down economics and it has never worked.  In fact, it has ALWAYS worked.  It worked when Warren Harding did it in the 1920’s; when John F. Kennedy did it in the 1960’s, when Ronald Reagan did it in the 1980’s and lest we forget, when Bill Clinton approved the biggest capital gains tax cut in American history.

Concerns over the deficit are legitimate and must be addressed by spending reforms this coming year.  We must always remember that both taxes and debt are driven by spending.

The proof of these policies will manifest itself over the coming year – and every American will be able to decide for themselves if this has made them better off.  That’s probably why the left has pulled out all the stops to defeat it.  Their arguments are the same economically illiterate attacks filled with class-envy that they made against Reagan.  When the American people awakened one day to find it was morning again in America, the left was discredited for a generation.

Let history repeat itself beginning today, with this vote.