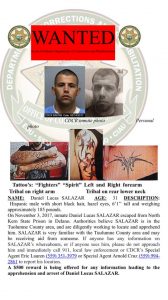 Sonora, CA — State corrections officials have updated photos that include tattoos on the escaped inmate from North Kern State Prison who could be hiding in the Mother Lode.

California’s Department of Corrections and Rehabilitation wants the public to take a close look at the photos in the image box in hopes that someone may have seen or could recognize 31-year-old Daniel Salazar, who is considered armed and dangerous. As reported here earlier this month, Salazar, who was behind bars for second degree robbery and using a fake ID to obtain personal information, was possibly heading to Tuolumne County as sheriff’s officials reported he had ties to the region.

The new wanted poster being distributed shows tattoos on his forearms with the left one reading “fighter” and the right one “spirit.” Additionally, the right arm and back of his lower neck have what corrections officials call “tribal” symbols. There is also a more recent photo of Salazar and a reward of $500 being offered for any information leading to his capture.

Anyone who may know Salazar or have information on his whereabouts is cautioned not to approach him but call 9-1-1.