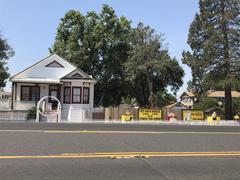 At the top of last night’s City of Angels Camp’s Planning Commission’s meeting agenda was an appeal on behalf of Pet Bath House owner Vonna Hughes, whose business practices caught the public and city officials’ eyes over the summer following the sudden disappearance of three dogs from her kennel.

As reported here, she claimed to their owner that she had the trio “put down” for fighting. However, following a “Missing Dogs” flyer campaign, two were recovered alive weeks later. The remains of the third dog, named “CiCi,” were discovered in a remotely discarded plastic bag, triggering a public “Justice For CiCi” protest along with calls for an investigation into her pet grooming and boarding operation.

City staff’s recommendation to the Planning Commission was for it to amend or revoke the permit after determining Hughes in violation of two permit conditions. These were by no longer having an area to separate small and large dogs and by not fulfilling her obligation to report injuries to dogs and people to Angels Camp Police and County Animal Services. Local veterinarians who were queried reported there have been numerous incidents involving her business but neither agency had reports from Hughes about them.

Hughes now has 15 days to appeal the commission’s decision.