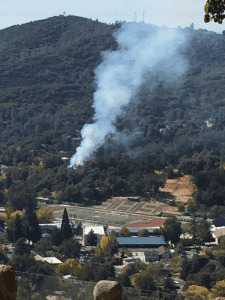 As reported yesterday, it ignited shortly before 1pm along the hillside of the north roadway edge of Snell Street. The fire was burning in grass and oak woodland. During the suppression efforts, the firefighters believed the cause appeared “suspicious” so investigators responded from Sonora’s police and fire departments.

The SPD has released a statement reading, “During the investigation, it was learned that witnesses observed juveniles leaving the area shortly before the fire was reported. Investigators determined the cause of the fire was arson. The Sonora Police Department is asking the public to contact the Sonora Police Department with any information that could lead to identifying person(s) responsible for the cause of this fire.”