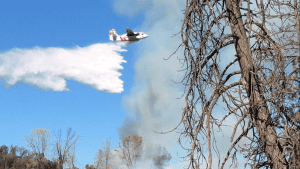 Update at 6:05 p.m.: Cal Fire spokesperson Emily Kilgore reports that the fire that was burning behind Sonora High on Snell Street has been contained at a half acre. Additionally, Sonora Police report the section of Snell Street that was closed off at Bonanza Road so that fire crews could access the fire has been reopened. Gilgore notes that no cause has been determined and the fire is under investigation.

Sonora High classes were not impacted by the fire. School officials emailed this information to parents:

At approximately 12:45 p.m. this afternoon, a wildfire broke out to the south of our school football stadium. The point of origin of the fire was not on Sonora High School property but was located just behind the football stadium hill near our concession building. The fire was brought to the attention of our administration team minutes after it began, and our team was able to respond quickly and work with the Incident Command throughout the suppression efforts.

Consequently, shortly after our school administration responded to the fire a student pulled the school fire alarm. The fire alarm system alerted the whole campus to the issue, but no fire or other safety issued occurred on any main sections of the Sonora High School Campus.

At approximately 2:00 p.m., the coordinating departments at the Incident Command confirmed to the Sonora High Administration team that the fire had been successfully contained and that students could pass to their 6th-period classes. All classrooms adjacent to the stadium were reoccupied at this time until the end of the school day.

At the end of the school day, our school buses departed at their regularly scheduled time and all after-school practices and athletic competitions resumed as previously scheduled.

All staff members on the Sonora High campus did a wonderful job ensuring that all our students remained safe and under control during the incident.

We are so thankful for the quick, efficient, and collaborative efforts of Sonora City Fire Department, Sonora Police Department, and Tuolumne County CAL Fire who were able to effectively suppress the fire and keep our campus safe. We live in an amazing community that is full of generous and hardworking servants who demonstrated today they are willing to go to great measures to keep our students and our community safe!

Every day at Sonora High School is full of learning lessons, and today was no exception. Tomorrow Sonora High School will be open as regularly scheduled, conducting a Wednesday Schedule. If you have any questions, please feel free to contact the school office.

Like yesterday, tomorrow, and especially today, it’s a great day to be a Wildcat!

Update at 2:21 p.m.: Forward rate of progress has apparently been stopped on a three-quarters of an acre vegetation fire that broke out near Sonora High. According to CAL Fire spokesperson Lindy Shoff all Columbia aircraft have returned to base.

According to Sonora Police the intersection of Snell and School streets has been re-opened. However police still have Snell Street at Bonanza Road blocked off.

Earlier, school officials send a text to parents letting them know that students were remaining in class and were safe.

Update at 1:25 p.m.: A vegetation fire off Snell Street behind Sonora High has grown to three-quarters of an acre.

Tanker 82 and Air Attack along with five engines are working to contain the blaze but the forward rate of progress has not yet been stopped, according to CAL Fire spokesperson Lindy Shoff. No structures are under threat. To view an aerial firefighting video by Ben Lawson, click here.

Update at 1:08 p.m.: Sonora Police report they have closed roads near Sonora High due to a vegetation fire behind the track off Snell Street and asking the public to avoid the area.

Specifically, the police have blocked off Snell Street at School Street and Bonanza Road.

It was called in at ten minutes before 1 p.m. Columbia Air Attack is on it and ground resources are also responding. The blaze is described as one-eighth acre in size with a slow rate of spread. We will bring you more details as they become available.