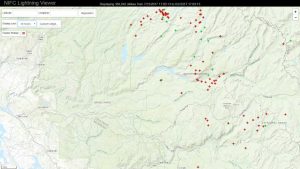 Stanislaus National Forest leaders note that multiple lightning strikes were visible yesterday, so vegetation fires are anticipated to develop over the coming days. Multiple small fires have already been located in the region. Recon flights are planned over the next few days to locate any new fire starts.

Stanislaus Forest Fire Chief Dave Updike says, “We ask the community to be especially vigilant and help us by reporting any smoke they may see while they’re on the Forest.”

Lightning strikes were recorded on both the eastern and western slopes of the Sierra Nevada.