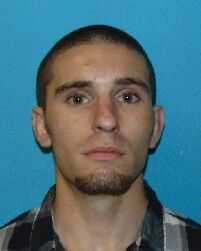 Soulsbyville, CA – The Tuolumne County Sheriff’s Office is asking for the public’s help to find a suspect who tossed over 20 grams of heroin at a probation officer while fleeing the scene.

25-year-old Robert Kendale Smith was one of three men found in a mobile home on Allison Way in the Soulsbyville area after officers from the county’s High Risk Probation Team raided a home Tuesday afternoon. While running from the house, Smith threw a backpack containing 24 grams of heroin and hypodermic needles at an officer. He was able to escape and now the Tuolumne County Sheriff’s Office has released his picture, which is in the image box, in hopes someone may know his whereabouts.

The probation team was at the home to conducting an ankle monitor alert check on 25-year-old Briton Brandsted-Curry. Officers discovered that he let his ankle monitor battery die, which is a violation of the Electronic Monitoring Program rules. Brandsted-Curry is already facing vehicle theft and drug charges for a previous arrest, reported here in June.

Also found in the home was 37-year-old Dearld Dean Munsee Jr. He was arrested on two warrants for grand theft, failing to appear and delaying justice after being found hiding in the mobile home and refusing to come out.

Smith is wanted for possession of heroin for sale, possession of drug paraphernalia, resisting arrest, evading, violation of probation and several vehicle code violations. TCSO describe him as 5’2″ tall and 130 pounds with brown hair and green eyes.

Anyone who sees Smith or knows his whereabouts should call the Sheriff’s Office at 209-533-5815.