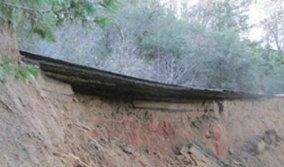 Calaveras County, CA — After being closed for more than two months, a stretch of Highway 26 in the West Point area is once again open to traffic

Caltrans reports the roadway was closed for 69 days due to storm related damage. As reported here, the roadway was washed out near Higdon Road on February 10th and the next day a rockslide buried another section along the North Fork Mokelumne River Bridge forcing a three mile closure between the two sections. As work got underway at the site, crews identified three damaged culverts, several roadway failures and spotted possible hazardous overhead debris for workers below. The latter prompted a controlled explosion in March to safely bring down the material.

A total repair costs for the roadway has not been tallied, according to Caltrans officials, but they estimate that about $3.5 million was spent. Caltrans reports motorists will face a moving closure as crews work along the roadway to do the final stripping on Friday.

To view before and after pictures of the storm damage and repairs from Caltrans click here: HWY26 storm damage repair by Caltrans