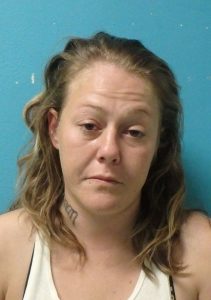 Sonora, CA – A man and woman wanted in connection with a stolen truck where a little Chihuahua puppy was found sleeping inside were arrested after a chance encounter.

As reported here Monday, Sonora Police released pictures of surveillance video taken of the suspects Sunday night inside the SaveMart on Stockton Road in hopes of apprehending them. However, it was an officer that ended up spotting the woman while at the Sonora Regional Medical Center Emergency Room on an unrelated incident Monday just after 11:30 p.m. She was identified as 31-year-old Tracy Lynn Shaw of Sonora.

The man, 31-year-old Chad Vernon Pearson of Sonora, was also located at the hospital. After further investigation both were arrested for vehicle theft. No details were released by police as to why the two were at the hospital. Each has a bail of $10,000.