Poll On Commercial Cannabis In Calaveras 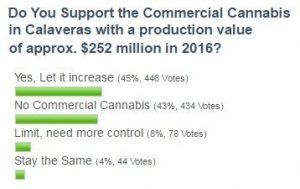 The study that estimated the commercial cannabis production value was published by the University of the Pacific, Center for Business and Policy Research in Stockton. The report was commissioned by Ebbetts Pass Lumber Company owner Jason Hauer, an alumni, who’s profits went up as commercial growers established their operations. The modeled scenarios developed for a study of the potential impact if commercial cannabis were allowed in the Sacramento area.

In Calaveras it was estimated that the 700-plus registered commercial marijuana grows in 2016 represent between 15 and 20 percent of the county’s economy, creating 2,600 year-round equivalent jobs. More details about the study are here. An initiative to ban the cultivation, processing, delivery and dispensing of cannabis in Calaveras is expected on the June ballot. Controversy regarding the measure is detailed here.