Update: Taps In Arnold To Temporarily Turn Off Again 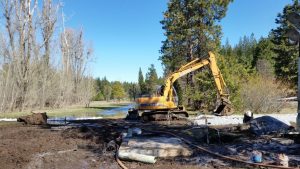 Update at 4:24 p.m.:  Calaveras County Water District (CCWD) reports that it will be temporarily shutting off the water again for up to 1,000 Arnold residents impacted by a valve failure Tuesday.

According to CCWD spokesperson Joel Metzger, on Thursday from 10 a.m. until 2 p.m. customers will be without water while the district’s crews work to complete a permanent repair to the affected part of the system. He reminds customers that boil water notices remain in effect and that they may continue through the weekend, depending on when successful sampling results come in.

Update at 7:45 a.m.: The taps have been turned on for the Nearly 1,000 customers in the Meadowmont area of Arnold due to a broken major pressure-reducing valve.

Calaveras County Water District spokesperson Joel Metzger indicates crews worked overnight to fix the leak this morning. Metzger indicates, “There is still a boil order alert in effect. Anyone who got a hand delivered notice [Tuesday]…needs to continue boiling water before they drink it or use it for things that might affect their health.  That notice will still be in effect until we have completed state mandated testing.” Metzger adds that testing usually takes two to three days and may even take through the weekend before the district can lift that order.  Once the all clear is given, Metzger says notices will be hand delivered to affected customers.

Original post at 6:44 a.m.: Arnold, CA — Nearly 1,000 customers in the Meadowmont area of Arnold continue to be without water this morning due to a catastrophic failure of a major pressure-reducing valve – but free bottled water is available.

Calaveras County Water District (CCWD) has announced it will foot the bill for bottled water for customers at a local grocery store. As reported here Tuesday, Calaveras County Water District (CCWD) says crews are working to fix the problem but it is a challenge as the break is located in a saturated field that was formerly a golf course. Customers can pick up free water at the Big Trees Market at the Meadowmont Shopping Center off Highway 4 in Arnold. The bottled water is limited to one per household of either a one-gallon jug or case of water. CCWD indicates simply tell the cashier they are impacted by the water leak and the district will pick up the tab.