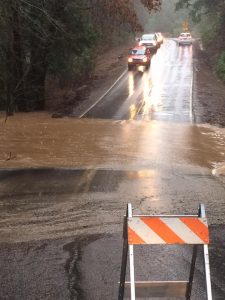 In a letter sent Friday to President Donald Trump it states that the relentless series of storms caused flooding, mudslides, evacuations, erosion, power outages and at least eight deaths. As reported here, one death was in Calaveras County on Friday after a three-year-old girl drowns in the Calaveras River after slipping on a dirt trail and falling into the water.

Brown acknowledged that Northern California was hardest hit. He noted that the storm system was so severe and widespread that state and local governments need federal assistance to continue dealing with all the problems it has created.

In a separate action, Amador, Mono and Riverside counties were added to the 49 counties included in an emergency proclamation Brown issued last month. The order also directs the California Department of Transportation to formally request immediate assistance through the Federal Highway Administration’s Emergency Relief Program for both Amador and Riverside counties.

The Governor’s letter to the President can be found here. Additionally, click here to view the entire executive order.