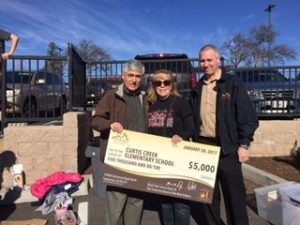 Update at 2:15 p.m.: Exactly what sparked the fire at Curtis Creek Elementary School that burned nine classrooms and triggered a temporary closure may remain a mystery.

This afternoon, during an interview with Clarke Broadcasting, Curtis Creek School District Superintendent Sharon Johnson shares, “[The blaze] burned so hot. The insurance company also sent a fire forensic person here yesterday and…it is inconclusive — at least that was his verbal [report].”

Johnson quickly adds, “It was definitely not suspicious. The building was built in 1957, opened in 1959, so it is an old building…without…to our knowledge, a lot of renovation at all. There is old wiring, so let us just say that! So we will not know [the exact cause], from the sound of it.”

She continues, “It is unclear – we are still working with the insurance adjusters as far as how, when…and what we are going to do with [the damaged rooms], because some we may not be able to get back into and some we may very well may. We are still in private conversations with the adjusters — and we are still waiting for the reports as well, to come back from the fire department…I am hoping, in another week or so.”

Within the next two to three weeks, 10 to 11 portable classrooms are expected to arrive, which will help return the students to a relative sense of normalcy, as school officials work to determine what to do with the rest of the building.

The school contains a total of 31 classrooms Johnson confides, recalling that it serviced roughly 800 students before the local lumber mills began closing. The fire was contained to the A-wing which, due to a recent winter storm-related mudslide, had already lost the use of four classrooms. “Basically, all of the classrooms in the A-wing are temporarily affected by the mudslide or the fire,” Johnson chuckles ruefully.

Due to already tight on-campus parking, Johnson says instructions on how to access the school for drop-offs and pick-ups will shortly be posted online and provided via a phone message to all the parents.

Despite the dual disasters, Johnson cheerily reports that contingency planning has gone very smoothly. Asked about latest developments, she replies, “We had three parent meetings yesterday with the classrooms that are most directly affected.” She adds that daily messages with updates also go out to parents and staff by phone.

An outpouring of support continues. Along with Sonora Elementary, Foothill Leadership Academy also held a recent fundraiser, Johnson gratefully points out, and Columbia Elementary is having one this Friday. “People have been walking in with donations…and Black Oak Casino Resort donated $5,000,” she acknowledges.

A letter written to parents notes that the entire A building on campus has received extensive damage and it will not be occupied. Portables are being ordered and will be placed on the primary playground when they arrive in a few weeks. All displaced classes are being assigned temporary rooms on campus. Room assignments will be announced later this week.

The district notes that a Go Fund Me account has been set up to help purchase needed supplies. You can find it by clicking here. The school has been collecting monetary donations, gift cards and supplies for pre-kindergarten through 3rd grade classrooms. Items can be dropped off at the district main office from 8am-2pm, Monday through Friday.

Later today a special school board meeting will be held to formally approve contracts for facility repairs and improvements. In addition to the electrical fire this past Thursday morning, there was also some damage on campus resulting from a recent mudslide that occurred during the heavy storm systems. Tonight’s special meeting gets underway at 5pm in the district office meeting room.

Curtis Creek Elementary has around 450 students.