New Melones And Other Reservoirs Filling Up 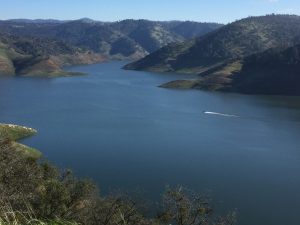 Sonora, CA — While New Melones Reservoir is only at 62% of its historical average, there is currently two-times as much water than this point a year ago.

New Melones was hit amongst the hardest during the drought due to its steeper requirements for downstream water releases. It is a controversial issue. Click here to read an earlier story from last week detailing the latest on that situation. New Melones is currently holding 865,466 acre ft. of water and it has a total capacity for 2.4 million acre ft., according to the California Department of Water Resources. At this point in 2016, it was 24% of its historical average and holding 339,186 acre ft.

You can see in the photo a boat traveling across New Melones this past Saturday, a positive sign for the tourism industry.