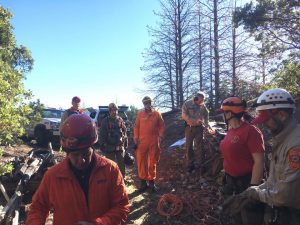 As reported here Wednesday, the bones were discovered in a mineshaft on Saturday but it was determined unsafe for local law enforcement to enter. That prompted a call to the California Office of Emergency Services to bring in the specialists.  Tuolumne County Sheriff’s spokesperson Andrea Benson indicates, “The remains were retrieved and have been sent out for an autopsy.”

Sheriff’s officials also gave more details regarding how the bones were found. They report that the remains were discovered on Christmas Eve by a group of people walking in the remote area. The hikers had previously explored the mine shaft a while ago and decided to take another look on this trip. Once inside, the group stumbled onto the bones and immediately notified the sheriff’s department.