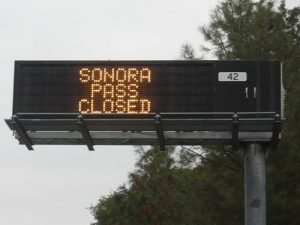 Sonora, CA — The recent wintry weather that blew through the region over the Thanksgiving weekend has prompted Caltrans to officially shut down two of the  Mountain Passes for the season.

As reported here Tuesday, the passes remained on temporary closure with Highway 4 Ebbetts Pass closed at the Mount Reba turnoff and Highway 108 Sonora Pass at Kennedy Meadows. Caltrans spokesperson Rick Estrada explains the decision to close the roadways, stating, “Part of it is there remain a couple feet of standing snow at the higher altitudes. Also, we’ve seen some rough weather come in and there’s anticipation that more storms will follow, so the decision was made to close the passes for now.” Estrada adds it was safety driven not only for travelers but for road crews as some of the lanes are narrow and hard for plows to get through.