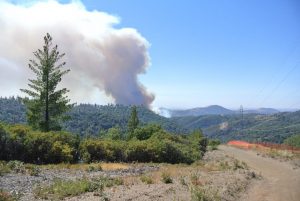 Update at 6 p.m.: The Marshes Fire that broke out Monday near Moccasin is now reported by CAL Fire officials as remaining right at about one-thousand acres with containment bumped up to 60 percent through the overnight.

CAL Fire Incident Commander Jeff Sanders says he does not expect the fire to grow. In fact, he states, “We hope to hold it within its current containment lines. We also envision the cooler temperatures and rising relative humidity to be a real aid to the firefighters out there on the line.”

Sanders shares that, as of Thursday night, 1,040 people are assigned to the blaze, with about a third of them on the fire line and that firefighting costs for the incident are right now running at around $3 million.

Although he was not able to comment on whether or not a citation would be issued to the driver who pulled over and parked a car in the brush to the side of Marshes Flat Road, igniting the blaze, Sanders warns motorists that it is up to the traveling public to make good decisions whether they are off or on the road.

Sanders further comments, “Even though we are almost into October, our fire season in California has extended longer and longer each year with the environmental conditions we are faced with — and the drought, as long as it has been — and the condition our fuels are in. One cloudy day does not take us out of a heightened awareness.”

As of 7 p.m. Highway 49 will re-open with no traffic controls or a pilot car in place, so Sanders asks those passing through to be diligent. Sending a cautionary request Sanders adds, “Remember that we do have firefighters out there working on and around the road system and we will have until mid next week, and so I would say to be careful, watch and keep your speeds down there in that location.”

Update at 11:45 a.m.: The Marshes Fire is 45 percent contained while remaining at 1,000 acres. Crews continue to make progress on the blaze as some of the ground and air resources have been released from the scene including an air attack, six air tankers, six engines, 18 bulldozers.  However, the number of fire personnel has increased from 940 to 1,232.

Cal Fire spokesperson Lindy Shoff reports that the flames as still threating the structures which hold 230 KV power lines from the Moccasin Powerhouse (See picture in the upper left-hand image box). Shoff adds, “Much of the fire area has not burned in over thirty years, resulting in a major buildup of dead vegetation. Firefighters must also continuously watch for rattlesnakes and yellow jackets which survived the flames in underground burrows, and are now out and moving through the burn.” Shoff also notes that the weather continues to be hot and dry, with higher winds expected over the area today, which could create problems for firefighters.

Additionally,  Marshes Flat Road remains open residents only. For details on the partial reopening of Highway 49 see below.

Update at 8:45 a.m.: Caltrans reports that Highway 49 has reopened from Marshes Flat Road to Coulterville. However, CHP officers are directing one-way traffic control on that stretch. Cal Fire spokesperson Lindy Shoff reports a pilot car will be escorting vehicles so motorists should expect delays.

Original post at 8 a.m.: Moccasin, CA — Firefighters make progress overnight on the Marshes Fire despite the rough and steep terrain.

Cal Fire reports that the containment has grown to 45 percent and the acreage remains at 1,000. A traffic note, Cal Fire had projected that Highway 49 would reopen to one-way traffic control from Moccasin to Coulterville at 8 this morning, but there is no confirmation that the roadway has yet reopened. Cal Fire spokesperson Nancy Longmore reports on what firefighters faced overnight, stating, “Steep, rocky terrain and limited access is creating on-going difficulties with the construction of over 12 miles of fire line. Rolling material, such as rocks and burning logs are making for unstable footing and hazardous work conditions at all times, but especially during nighttime darkness.”

As first reported here, Cal Fire has determined what sparked the blaze.  The number of personnel on the scene has jumped to 940 with resources totaling 105 engines, 27 bulldozers, 17 water tenders, 36 fire crews. In the air are two air attacks, six tanker and four helicopters.