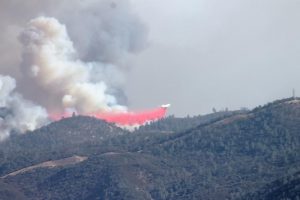 Update at 7pm: CAL Fire reports the size estimate of the Marshes Fire remains around 400 acres and there is no containment. Fire officials hope to cut containment lines throughout the evening and early morning hours when the fire intensity drops. Crews are anticipating to remain on scene for an extended period. The Tuolumne County Sheriff’s Office continues to order the mandatory evacuation of the Moccasin Ranch Estates and an advisory evacuation for homes directly east of the Hetch Hetchy headquarters on Highway 49. What ignited the Marshes Fire remains under investigation.

Update at 5:48 p.m.: CAL Fire spokesperson Lindy Shoff reports that the Marshes Fire is now at about 400 acres with no containment yet. Current fire personnel on the wildfire is estimated at 350 to 400. All earlier evacuations and advisories are still in effect.

To view footage of the air response, shared by Deputy Chris Passeau of the Tuolumne County Sheriff’s Office, click here.

Update: at 4:48 p.m.:  The Tuolumne County Office of Emergency Services reports that it made an official request to Red Cross to set up an evacuation center in response to the Marshes Fire and just received confirmation from Red Cross officials that they are responding. The center will remain at the Hacienda, according to OES Coordinator Tracie Riggs.

All earlier evacuations and advisories remain in effect. The wildfire, burning near Moccasin is still being described as at 150 acres in size with a moderate rate of spread and no containment. Reportedly it is burning west and south at last check. All of Columbia airbase resources are on the blaze, along with numerous other aircraft; 310 in fire personnel are assigned, including 17 engines, three strike teams, four water tenders, four hand crews and three ‘dozers.

Update at 3pm: The Tuolumne County Sheriff’s Office reports that an evacuation center is opening at the Hacienda located at 5182 Fuentes de Flores in the community of La Grange.

Update at 2:50pm: The Marshes Fire burning near Moccasin is up to 150 acres in size. The Tuolumne County Sheriff’s Office reports that a mandatory evacuation order remains in effect for the Moccasin Ranch estates. CAL Fire reports that there are 15 homes immediately threatened. In addition, the Sheriff’s Office has called for an advisory evacuation notice for the area immediately east of the Hetch Hetchy headquarters on Highway 49. Caltrans reports that Highway 49, in the vicinity of the fire, is closed. You should avoid the area.

Update at 2:33pm: The Tuolumne County Sheriff’s Office reports that a mandatory evacuation order has been issued for the Moccasin Ranch Estates. Residents in that specific area should leave immediately.

Update at 2:20pm: Caltrans and the CHP are closing Highway 49, near Marshes Flat Road, so that no traffic can pass through. You will want to avoid the area. The Marshes Fire ignited during the noon hour in the area of Marshes Flat Road and Highway 49 near Moccasin. The latest size estimate from CAL Fire remains 40 acres.

Update at 1:40pm: Additional resources continue to arrive on scene to assist in fighting the Marshes Fire burning near the area of Marshes Flat Road and Highway 49. CAL Fire’s latest size estimate remains 40 acres. There are some structures and power lines in the general area, but no evacuations have been called for at this time. There are currently 18 engines, three dozers, four crews and multiple air resources.

Update at 1:15pm: CAL Fire estimates that the fire burning on Marshes Flat Road has grown to 40 acres. There are no structures immediately threatened, but there are some power lines in the area. Additional aircraft, engines and water tenders are being dispatched to the scene. The fire is near the Highway 49 intersection. What ignited the fire is still under investigation.

Update at 12:42pm:  The CHP reports that officers are responding to the fire, near Marshes Flat Road, to help provide traffic control.

Original story posted at 12:30pm: Moccasin, CA — There is a vegetation fire reported in the area of Marshes Flat Road near Highway 49. It is in the Moccasin area. Air and ground resources are responding to the scene. CAL reports that the blaze is around seven acres in size.