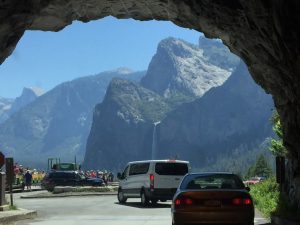 Yosemite National Park, CA – A major parking rehab shortly set to start in the park will not affect Yosemite visitors over the holiday weekend — with the exception of those who plan to wake up there Tuesday.

According to Yosemite National Park spokesperson Jamie Richards, as part of ongoing plans to improve parking and traffic circulation in and out of the park, the primary day-use Yosemite Village Parking Area will close Tuesday morning and remain so, probably until late November or early December.

During this time, as weather allows, she says that a construction crew will be expediently working on revising the entrance and exit to make it safer for vehicles and pedestrians as well as to create “a much smoother sense of arrival” in the park. She readily admits that currently, it is more confusing than not for visitors to figure out where to park and how to get around in that area.

In the meantime, as Richards explains, “We will be directing visitors to park at Half Dome Village, if you are heading towards that end of the park, and for all visitors who want to head towards Yosemite Village, itself or…Yosemite Falls we are going to have a traffic detour in place. When you come into the park you will be instructed to follow the El Capitan crossover and actually take Northside Drive to the Yosemite Falls Parking Area that we opened last year.”

While the temporary shift is a big one that might cause more than a few longtime visitors to grumble, Richards maintains that all of the other main parking areas throughout Yosemite Valley will remain open. “We do not expect huge impacts,” she states. Assuredly she emphasizes, “Traffic patterns throughout the valley are going to change as the work progresses – certain areas may close temporarily, just to help the construction crew move forward. We are asking visitors to just watch speed, proceed with caution and follow the directional signs – we will help you get to the right locations as you enter the park – everything is going to be well-signed.”

During construction all overnight parking at campgrounds and lodging, visitor facilities — including campgrounds, hotels, restaurants and stores — will remain open and operational. Visitors still be encouraged to park at Yosemite Falls parking area or Half Dome Village and ride the free park shuttle to destinations throughout Yosemite Valley. Park officials also note that the Yosemite Area Regional Transportation System (YARTS) bus service is also an excellent way to get into Yosemite Valley with access from several areas around the Mother Lode. Click here for more details.

This weekend will undoubtedly be a busy one at the park, which has enjoyed one of its busiest on record. “Visitation typically tapers off following the Labor Day Weekend, so this is a good time for us to start a major construction project,” Richards shares.

Asked about the National Park Service’s ongoing lawsuit with former concessionaire Delaware North Companies over several of Yosemite’s landmark buildings and areas, which caused the NPS to rename them earlier this year, Richards says there are no new developments to report. She shrugs, adding, “The National Park Service is still going through the legal moves…continuing to use the new names.” As more and more folks become accustomed to the new monikers – such as The Majestic Yosemite Hotel (formerly The Ahwahnee) – Richards says she does not know, pending the legal outcome, if the park would revert back to using the historic names.