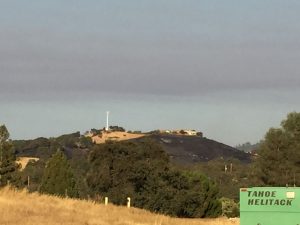 Update at 9am: CAL Fire reports that containment on the Willow Fire in San Andreas has reached 60%. It remains at 450 acres. Additional staff is being released from the incident, as 138 firefighters are now assigned to the incident.

Original story posted at 6:57am: San Andreas, CA — The Willow Fire in San Andreas has reached 50% containment and it is holding at 450 acres.

An estimated 200 fire personnel are still on scene, including 25 engines, six crews, two dozers and seven water tenders. The fire started on Sunday afternoon along Mountain Ranch Road, and residents were evacuated from the Willow Valley Subdivision and along Old Gulch Road. They were allowed back to their homes by late that afternoon. Rene Ilene Hogan has been arrested for igniting several fires that merged into the one larger, 450 acre, fire.

To read an earlier story detailing how the fire started, click here.

The view a story detailing the progression of the fire on day one, click here.