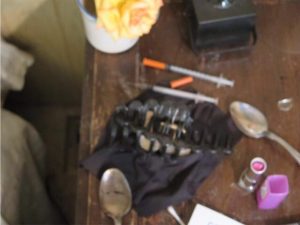 Sonora, CA — A man and woman were arrested after an early Friday morning raid at a Sonora residence and one had seven arrest warrants pending against them.

The Tuolumne County Narcotics Team served a search warrant at a residence in the 20000 block of Lower Hillview Court in Sonora at 7 a.m. Friday.

Meder also has prior arrests. As reported earlier here, he has been arrested twice for leading law enforcement on chases while drugs were being tossed out of vehicles, the most recent pursuit happened earlier this month.