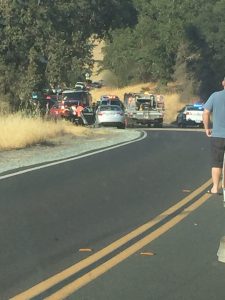 As reported here, the accident happened just before 5:30 p.m. on Highway 4 about four miles west of Angels Camp and east of Stallion Way. The CHP blames driver inattention for the crash reporting that 43-year-old David Carll of Angels Camp was driving a 2013 Ford Escape at about 45 mph eastbound on the highway when he allowed the vehicle to drift off the roadway. The SUV overturned onto its roof before skidding into and blocking the westbound lane. Officer Rebecca Myers says, “Highway 4 was closed in both directions for about an hour while officers investigated the collision and crews removed the wreckage.”

Alcohol and drugs are not considered a factor in the crash. Carll suffered minor injuries in the accident.