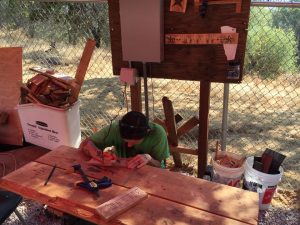 Sonora, CA — Female inmates at the Tuolumne County Jail are working to benefit themselves and Mother Lode communities.

Pictures in the upper left-hand image box show the fruits of their labor as they have toiled on a nursery since last year, building a green house, covers and planter boxes at their undisclosed work site. Sgt. Andrea Benson explains, “We don’t give the exact location. We don’t want people or any trouble with contraband being left for them or possibly trying to help them escape, but it is in town.”

Sgt. Benson adds that the inmates are learning various skills. The women are using power tools to build chairs, bird houses, bird feeders, dog houses and chicken coops, as well as growing a garden of vegetables, herbs and landscaping plants. Currently, two chickens roam the nursery and more are planned so that farm fresh eggs can be used to feed jail inmates, according to Sgt. Benson, who adds that other plants grown in the nursery will be used to landscape around the new jail. Additionally, 5000 seedlings of Ponderosa Pine Trees have been sprouted to reforest areas of the Rim Fire footprint. With regards to pay, Sgt. Benson indicates, “They get work time off of their sentence, kind of good behavior work credit. We’re teaching them skills and it may help them get employment when they get released.” She notes that they give them certificates, which can in turn be shown to potential employers.

As reported here, male prisoners have been working outside the jail for more than a year and a half taking on labor intense jobs in the county among them forestry work, bear box installations, tree, brush and trail clearing, tree planting, woodcutting and landscaping. All of the inmates must meet certain criteria including being non-violent offenders to be considered for the program.