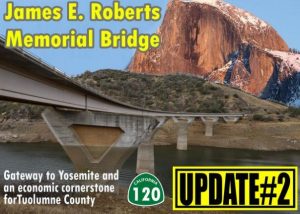 Groveland, CA – Caltrans reports that repairs to the James E. Roberts Memorial Bridge on Highway 120 will cause up to 10 minute delays until the project is slated to finish in November, 2017.

As previously reported, the work to upgrade the deck and earthquake readiness of the 46-year-old bridge and began in July and cost nearly $21 million. One-way traffic control began Tuesday and will run through the project’s completion. Traffic lights have been set up at both ends of the bridge to direct traffic. Caltrans spokesperson Rick Estrada indicates that the delay will be no longer than ten minutes for motorist as the light is on an automatic timer.

In October the second phase of the project is set to begin with a full closure overnight, except on weekends to impact motorists less. Crews will work on replacing the deck from 5 p.m. to 7 a.m. each night Sunday through Thursday. That part of the project is expected to be completed in February 2017.  Caltrans reports that once the new deck is in place, crews will work on the joint seal repairs, which will shut down the bridge for a week. After that, one-way traffic will continue through the end of the project when there will be a grand opening of the roadway.  With the roadway leading into Yosemite National Park, Estrada stresses the goal, “We recognize how critical the weekend is to the businesses up there, whether it’s the park or Groveland. So, it’s a priority to us that people still have easy quick access up there.”