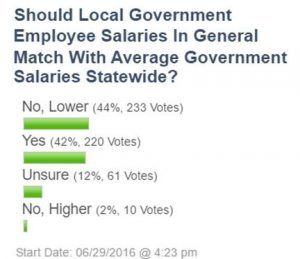 An informal poll on myMotherLode asked “Should Local Government Employee Salaries In General Match With Average Government Salaries Statewide?” The majority voted that local salaries should not match but be lower, with 45 percent of more than 500 votes. A close second, 42 percent, agreed that local government salaries should match statewide averages. Another 12 percent were unsure and two percent felt local salaries could be higher than the state average.

As reported in the recent news story “Report Details Salaries Of Local Government Employees” here, California’s Controller released a new report comparing the salaries of government employees in cities and counties across the state.

Statewide, the average wage for county employees was $63,823 and the average retirement and healthcare cost was $25,352.