Seeking Public’s Help For Cause Of Sonora City Fire 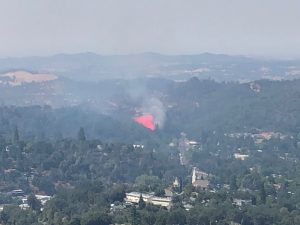 Retardant dropped on the City FIre in Sonora 7-12-22

Sonora, CA – The cause of the City Fire in Sonora is still unknown, and now the public’s help is being sought.

The fire broke out Tuesday just before 11 a.m. along the east side of Stockton Road near a homeless camp across from the former Camp Hope, which was shut down last year by Tuolumne County leaders citing hazardous materials and other safety concerns, as detailed here. The City Fire grew to about a half-acre before firefighters were able to stop the forward rate of spread, as reported here. The roadway was closed for several hours from Highway 108 to Ponderosa Drive as firefighters mopped up and investigators surveyed the scene for a cause. City officials were giving out eviction notices to people living at the site around the time that the fire started.

Clarke Broadcasting reached out to Sonora Fire Department Chief Amie New regarding the cause, and she referred us to the Sonora Police Department (SPD), which is handling the case. We then called SPD spokesperson Thomas Brickley to get an update. He replied, “We do not have any information to release yet and are looking for information from witnesses who may have seen anything or been in the area when the fire started.”