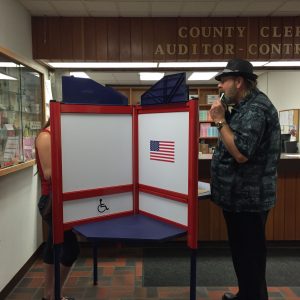 Sacramento, CA — The historical surge in California’s voter registration did not translate into more citizens casting their ballots.

The voter turnout in the state’s primary was about average as Wednesday figures showed only one in four eligible Californians and one in three registered voters turned in ballots. A far cry from what election officials had hoped for with the last-minute surge in registration and immense interest in the competitive presidential contest. Even with millions of votes left to be counted, the number is not expected to reach the record participation set in 2008, according to election officials.

Additionally, the state’s 4.9 million registered Republican voters may play a key role in California’s November elections as the GOP was shut out of at least eleven races including the open U.S. Senate seat. The two top spots were claimed by Democrat’s Attorney General Kamala Harris, who had an impressive victory in Tuesday’s primary, and Congresswoman Loretta Sanchez, from Orange County to battle it out in the fall. Several Republican Assembly members will also face tough Democratic opponents in November and it remains to be seen whether Donald Trump’s candidacy will energize GOP voters to head to the polls or stay home in November.

For the local results go to our elections page here.