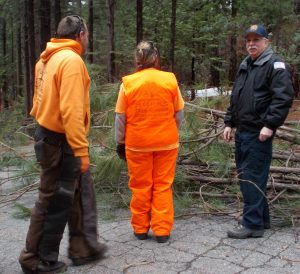 The work was done on 17 miles of road within the 1.2 square mile fire district. Chief Larry Crabtree adds, “Every road in the district has had something done on it.” Dead and dying plant material within ten feet of the roadways was removed along with vegetation blocking fire hydrants. Additionally, brush that impaired visibility on curves and at intersections was cut down. Chief Crabtree indicates, “At the height of the project crews were removing approximately 26,000 pounds or 13 tons of material per day that would have otherwise presented a fire hazard to the community.”

As previously reported, a more than $190, 000 state grant paid for the brush clearing with Chief Crabtree proudly touting that a local company, Hope’s Tree Service was contracted to do the removal keeping the money in the community.