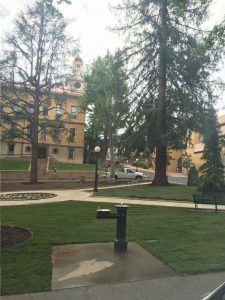 Sonora, CA — After many months of rehab Courthouse Park is beginning to bloom again.

According to Tuolumne County Administrator Craig Pedro, sod and a center circle planting of drought-tolerant, white-flowered ground covering are the first steps in restoring the park to its former foliage before the felling of several trees last year, as previously reported. The landscaping was installed Thursday.

“We did double-check with TUD on any watering restrictions,” Pedro states. The city plans to restrict water use, due to the drought; the utilities district has also requested that the city restrict its hours of watering to between 7 p.m. and 10 a.m. as well as to ensure that water does not run onto the surrounding sidewalks.

With the fresh work in place, Pedro says that the major portion of the Courthouse Park Restoration Project is now complete. Other near-term plans include pouring a cement pad and providing a trashcan adjacent to the nearby transit stop. Down the line, the city eyes adding a new Giant Sequoia to the south quadrant in place of the one that had died; as supplies of such trees are currently limited, due to the drought, that plan may take some time to bring to fruition. A replacement flagpole for the well-worn, warping one that was taken down is also in the works. Pedro says the city plans to install it in a different spot, still to be determined.