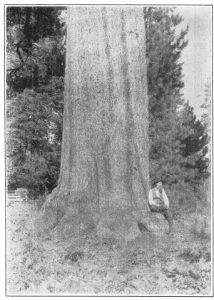 Sacramento, CA — The state celebrates an environmental philosopher legend that was quoted as saying, “The mountains are calling and I must go.”

Governor Jerry Brown has issued a proclamation declaring Thursday, April 21 as “John Muir Day” in California. Brown called Muir “a giant of a man” who in addition to his scientific discoveries, engineering innovations and writings still inspire society today. The Governor also noted that Muir was instrumental in the creation of the National Park System.

Muir helped found the Sierra Club and National Audubon Society.  Muir woods, a redwood forest near San Francisco, was named in his honor. The National Park Service notes that when Muir learned of this recognition he declared, “This is the best tree-lovers monument that could possibly be found in all the forests of the world.”

Muir is pictured in the left-hand image box by the oldest sugar pine tree in Dorrington in Calaveras County had to be cut down in 2014 as previously reported. Additionally, another one of his famous quotes sums up his love of the forest stating, “In every walk with nature one receives far more than he seeks.”