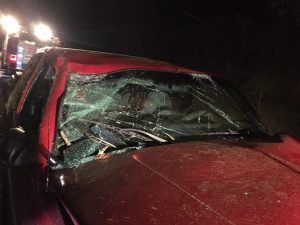 Tuolumne, CA — A 17-year-old Sonora male is not only facing drunk driving charges, but also hit and run after crashing his truck with three passengers inside. The accident comes less than three days after the CHP held a mock DUI crash prevention event at an area school.

The teen was driving a 1996 Chevy Silverado southbound on Mi-Wu Street, south of Seven Pines Road on Thursday around 12:35 a.m. when he lost control of the truck.  It plummeted down an embankment, smashing into several trees, after which, he and a passenger, 24-year-old Joseph Guinn of Tuolumne fled the scene before emergency responders arrived, according to the CHP.  Guinn was later found uninjured at a relative’s house.  However, the juvenile driver, whose name is being withheld because he is a minor, showed up a short time later with visible cuts to his face, legs and arms.  During questioning, officers determined that he was under the influence of alcohol.  He was arrested for felony DUI and hit and run.  Further investigation at the scene also brought public intoxication charges against, 25-year-old Laura L. Forde, another passenger in the pickup.  Suffering from an injured ankle, passenger, 23-year-old Chelsea K. Guinn of Tuolumne was taken to Sonora Regional Medical Center.

When asked by Clark Broadcasting who provided the alcohol and if charges could be pending, Officer Nick Norton replied, “That’s all still under investigation.  If it was determined that one of them provided or another facility provided the alcohol to this minor, they could be looking at potential charges.”

Ironically, as reported earlier this week, the CHP held its “Every 15 Minutes” drunk driving mock crash at Summerville High School on Monday warning of the dangers of getting behind the wheel while drunk.  Norton notes that it is a reality check, cautioning, “The program is fresh in everybody’s minds from just a few days ago and then this happens within days of that event, it makes it like, ‘Hey, this really does happen.’  We’re lucky that no one was seriously hurt or killed.”