Olsen Heading Back To Roots 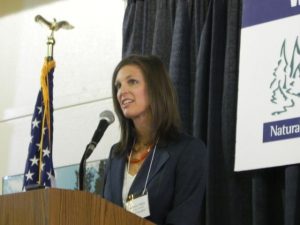 Riverbank, CA — A surprise announcement from Assemblymember Kristin Olsen Thursday as she has tossed her hat into the political ring again, after calling it quits in January.

As previously reported, Olsen will be terming out of the Assembly this year and had decided not to run for any other open state seats to spend more time with her family, which includes three children. This sudden announcement that she will run for the District 1 seat on the Stanislaus County Board of Supervisors comes as a shock, not only to some in the political arena, but Olsen herself. She stated, “I’ve spent the past five years commuting to and from Sacramento, and it’s left me with a lasting impression: Stanislaus County is home and it’s where I want to be. Though it’s unexpected, I’m really excited by the opportunity to continue serving the Central Valley and working to make our community a better place to live, work, and raise a family.”

District one includes Oakdale, Riverbank, Waterford, Empire, Knights Ferry, Valley Home, and a portion of eastern Modesto.  Olsen had represented the Mother Lode prior to redistricting. There has been speculation that Olsen will run for Senator Tom Berryhill’s District 8 seat when he terms out in 2018, which could still be her plan, as her original announcement not to run for state office came from a “Paid for by Olsen For Senate 2018” email address.