Man Who Crashed Into Sonora Business Arrested For DUI 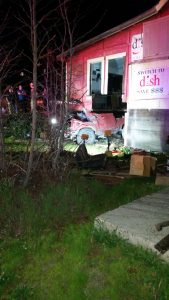 Sonora, CA — The CHP has identified the man who crashed into the AV Computer Store on Tuolumne Road Tuesday evening.

As first reported by Clarke Broadcasting, the wreck happened around 4:45 p.m. at the intersection of Mono Way and Tuolumne Road. The CHP reports it took several hours for firefighters to free the driver, 29-year-old Dane Willis of Tuolumne, who was pinned in his 1988 Suzuki Samurai after smashing it into the building. Officer Nick Norton says, “It was a weird location. He just took the turn a little too soon and ended up in the building. Fortunately, nobody in the building was hurt. He was evaluated…and arrested for being under the influence of drugs.”

Norton adds a large portion of the buildings floor and wall was removed to get Willis out of the vehicle. Willis was flown to Doctors hospital in Modesto with moderate injuries. Norton says Willis suffered from cuts to his head, torso and legs. The right turn lane from eastbound Mono Way was shut down for several hours causing traffic delays.