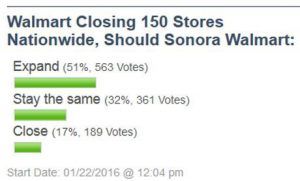 A recent myMotherLode informal poll asked; with Walmart Closing 150 Stores Nationwide, Should Sonora Walmart expand, stay the same or close? The results were in support of expanding the store with just over half, 51 percent, of the votes. Stay the same received 32 percent of the votes and Close got 17 percent.

Following a legal battle that lasted over half a decade, the Sonora Walmart will start construction to expand to 27,000 sq. ft. this summer. Details are in our news story here.

On January 15th Walmart released, of its nearly 11,600 worldwide stores, it plans to close 269 stores and clubs, including the company’s 102 small stores, Walmart Express. Doug McMillon, President and CEO of Walmart Stores, Inc. says “Approximately 16,000 associates will be impacted, including around 10,000 in the U.S.” The company says more than 95 percent of the stores closing in the U.S. are within 10 miles of another Walmart, and many employees could be placed at nearby locations. Other employees will receive 60 days’ pay and, if eligible, severance. McMillion says, “Our objective is to help all associates find their next job opportunity, whether with Walmart or somewhere else.”