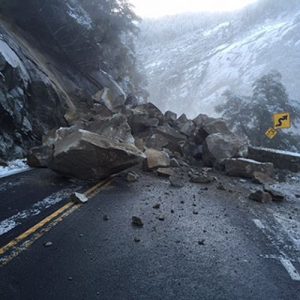 Yosemite, CA —  El Portal Road in Yosemite National Park, which is a continuation of Highway 140 leading to Yosemite Valley, is scheduled to reopen.

Motorists will be able to travel the roadway once again at 6:00 p.m. Saturday, January 9, according to Park officials. As previously reported, a rock fall brought down several heavy boulders blocking the roadway since early Thursday morning. Park officials reports that staff has been working extended shifts to clear the rocks and debris from the road and make it safe for travel. Additionally, visitors are urged to drive with caution as crews, equipment, rocks and other debris may still be present along the road.

Of note, currently many roads in the park are under chain restrictions with all drivers, including those with four-wheel and all-wheel drive vehicles, required to put them on in designated areas.