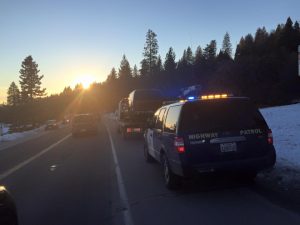 Tuolumne County, CA — The recent holidays and plenty of snowfall brought visitors to the area ready to play who also created traffic hazards

As previously reported, 110 parking citations were handed out, mostly in the area of Lyons Dam and Little Sweden along Highway 108 over this New Year’s weekend, as people came up to sled, often parking in areas clearly marked as illegal and tow-away zones. At Tuesday’s Tuolumne County Board of Supervisors meeting, District 3 Supervisor Evan Royce signaled that it is currently a huge problem. He pointed out, “We need to be able to deal with some of the volumes and impacts from that. There is garbage…no bathrooms — and people are going to the bathroom.”

District 2 Supervisor Randy Hanvelt agreed about there being issues but told the board it was nice to see tourists come back to Tuolumne County in the winter. He noted, “I hope the up-country people were feeling a positive economic impact out of that — I think they were. While it is an annoyance to have all that traffic…in your hometown it’s a good thing. I’d like to challenge the transportation committee to deal with that problem — and Caltrans.”

Also concurring, District 4 Supervisor John Gray pointed out that the Forest Service could be added to the mix of cooperating agencies. Possible fixes he recommended might be official vehicle pull-off areas, outfitted with porta potties, and better parking restriction signage postings along the nearby roadways.