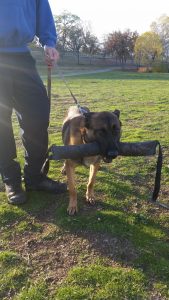 Belgian Malinois being considered for the K-9 Unit

Angels Camp, CA — The Angels Camp Police Department has received an early Christmas present – a pledge to help pay for a service dog.

After the loss of 6-year-old Kain, as reported in November, due to a sudden infection that affected his internal organs, the department has been searching for a replacement. Having only been with the department since 2012, money for another canine was scarce prompting Chief Todd Fordahl to ask the public for monetary help, which brought in $2,500 in donations. However, a total of nearly $10,000 was needed. This week the Wintercreek Foundation of San Andreas stepped up and offered to pay the rest.

“We are very grateful,” says an overwhelmed Chief Fordahl. “With the recent Butte Fire disaster, and the holiday’s right around the corner, there is a lot of need in our community. With all those things going on, the community still stepped forward and provided the funding we needed – I can’t say thank you enough.”

The department is already looking at two service dogs that were flown in from Denmark. (The dog’s pictures are in the left-hand image box). Additionally, several people have offered their dogs as possible replacements, which Chief Fordahl says they plan to evaluate in the coming weeks. He adds, “We appreciate those offers as well. The issue for us is we have to be able to determine whether they are actually capable of functioning as police dogs.”

If one of the potential donor dogs is chosen, Fordahl indicates that the money will be returned to the donors. Depending on how the evaluations go, a new K-9 member could be joining the force in the next couple of weeks.