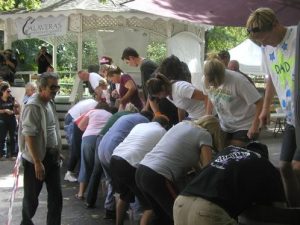 Murhpys, CA – The Calaveras Winegrape Alliance (CWA) has delivered on its promise to help those hit hard by the Butte Fire.

As previously reported, in October, the alliance pledged to give victims the proceeds from its silent and live auctions held during the 2015 Grape Stomp. In the past, the money has always gone to a range of community needs but CWA Executive Director Sara Reed says, “This year was a little different in that the board decided that it would be probably a better use of the funds to put it back where the community really needed it this year in disaster relief.”

The group raised $5200 and this week handed it over to the Calaveras Community Foundation (CCF). “What’s great about that foundation is that their able to piece out the funds and see…does the food bank need something,” explains Reed. “They [CCF] give that money to other non-profits in the community that are benefiting the Butte Fire victims and this way the money is actually going to the people in the community that are really hurting right now.”

Reed notes that without the support of area businesses, which provided items for the auction, along with volunteers and members, this donation would not be possible.