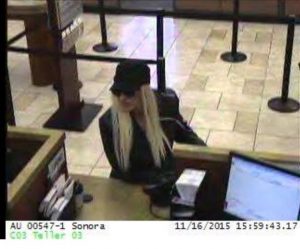 Update at 8pm: The Sonora Police Department has released some details about today’s robbery at the Wells Fargo Bank on Mono Way. At around 4:05pm a female entered the bank and handed a note to bank employee, presumably demanding money. She was given an undisclosed amount of cash and left the bank through the north doors, and fled through the parking lot.

The PD reports that the suspect is described as being a white female adult in her mid to late 30’s, long blonde hair, with a black baseball cap, wearing large oversize glasses, and carrying a large flower patterned handbag. No weapon was seen. Anyone with information is encouraged to call the Sonora Police Department at 209-532-8141.

As reported earlier, the Tuolumne County Sheriff’s Office confirms that there is an investigation looking into whether the incident at Wells Fargo, and a bomb threat called into the Black Oak Casino Resort, could be connected.

It was a busy day for law enforcement in the county. As reported earlier there was a bomb threat called into the Black Oak Casino Resort. Deputy Rob Lyons of the Tuolumne County Sheriff’s Office confirms that there is currently an investigation into whether the two incidents could be connected. We will pass along additional details when they come into the news center.

The Police Department indicates that the investigation is expected to continue through the evening. We’ll pass along more information when it comes into the news center.