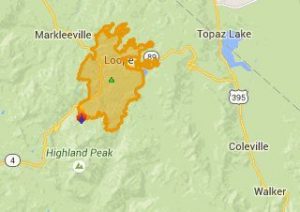 Markleeville, CA — The fire’s size jumped slightly, but crews are gaining more ground as there is now 29 percent containment.

As previously reported, the incident command team had reduced the acreage on Friday to around 16,400 from an earlier projection of more than 17,000.  However, this morning that number rose once again to 17,622 acres scorched just 3 miles south of Markleeville. Fire officials say most of the acreage growth was on the southern front of the fire’s perimeter.

There are concerns that this weekend’s projected dry lightning storms and high winds  could “hamper firefighter’s efforts,” according to fire officials. The number of firefighters battling the blaze has increased from 951 to 1,173. The resources on the scene include 34 crews, 53 engines, 12 water tenders, 11 helicopters and support personnel. The estimated cost is around $6,400,000.