Some Growth In New Population Numbers 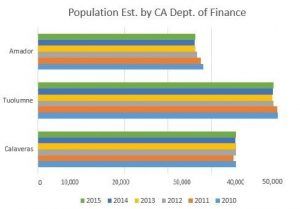 Sacramento, CA — A new California Finance Department report finds Sonora and Angels Camp with minimal gains in population. The report notes that of 482 California cities, 421 had estimated gains in population, 50 had reductions, and 11 experienced no change. The city of Sonora with 4,879 is ranked 173rd in the state for its .8% population increase, or an estimated 40 people, from January 2014 to January 2015. Angels Camp is ranked 392nd with 3,811 an increased of 9 or .2% from last year.

The city with the largest population decline was Weed in Siskiyou County (-8.8%), which was a direct result of housing loss from the Boles fire.

The population estimates are produced annually with Census and other state department information for use by local areas to help in calculating their annual budgets. The State Controller’s Office uses Finance’s estimates to update their population figures for distribution of state money to cities and counties, and to comply with various state codes.

A recent U.S. Census Bureau report estimates a slow growth in population statewide, and in the Mother Lode in the next 45 years. Details are here. A March Census report of metropolitan areas stated the nation’s micro areas, which include Tuolumne, contained about 27.2 million people in 2014, an increase of about 13,000 from 2013. Two of the fastest-growing micro areas between 2013 and 2014 were in North Dakota. Overall, fewer than half (244 out of 536) of all U.S. micro areas gained population between 2013 and 2014. Calaveras, Amador and Mariposa counties were too small to be included in the report. Last year’s Census report show that the median age of Mother Lode residents is continuing to increase much more than the state average.