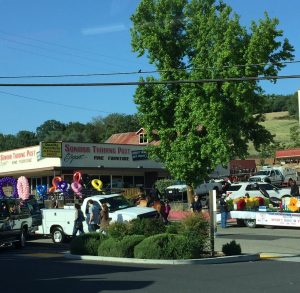 Sonora, CA — Chairs are lined up and we are just hours away from the Mother Lode Roundup Parade.

New this year, Tuolumne County Transit will run a free trolley service to downtown Sonora. It will begin at 8am and pickup sites include Columbia Elementary, Jamestown Elementary and the Junction Shopping Center.

There will be several street closures due to the parade. The information below was provided by the Sonora Police Department:

South Washington Street at State Highway 108 will be closed at 8:00 am.

North and South Washington Street will be closed at 9:30 am.

Stockton Road at Green Street will be closed at 9:30 am.

Snell Street at Bonanza Street will be closed at 9:30 am.

School Street between Washington Street and Snell Street will be closed at 9:00 am.

There will be “No Parking” allowed on the side streets between Washington Street and Green Street and between Washington Street and Stewart Street. This will include Elkin Street, Dodge Street, Jackson Street, Yaney Street, Bradford Street, Theall Street, Linoberg Street, Church Street, June Street, Gold Street, Williams Street, and Lytton Street. These restrictions will start at 5:00 am and will conclude at the end of the parade. Vehicles parked in these areas will be towed.

Following the parade, the parade route will remain closed for approx. 10-15 minutes to allow spectators to leave the area. Motorists can expect heavy vehicle and pedestrian traffic at the conclusion of the parade resulting in delays.