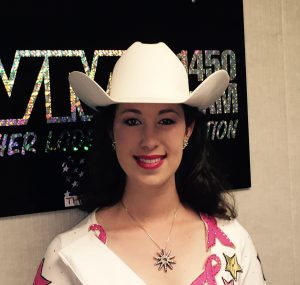 Ryan was Wednesday’s KVML “Newsmaker of the Day”.

Ryan also won the Horsemanship Award and the Photogenic Award.

“I was really proud of the Horsemanship Award as it is my favorite category,” said Ryan. “I spend six days a week, two times a day riding my Mighty Mouse (the name of her horse).”

As a young girl, Ryan used to watch the Mother Lode Roundup Parade with her family.

“I may cry when I see my parents watching me in the Parade this year,” Ryan said.

Twenty-four year old Ryan has a Bachelors of Science Degree in Agricultural Communications and Journalism from Kansas State University. She would like to pursue a Masters Degree from Stanford University.

The second runner up was Evon Meckler.

The next big Roundup event is “Band Review” 6 PM tonight at Sonora High School, followed by the Calcutta this Thursday 6 PM at the Sheriff’s Posse Grounds.