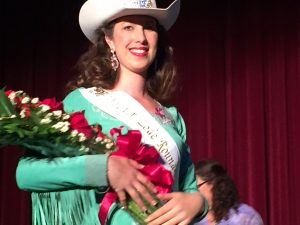 Sonora, CA — It is Mother Lode Roundup week, which means that a new queen was crowned last night.

Congratulations to Paige Ryan, this year’s queen. The first runner-up was Mary Mackenzie Suess and the second runner up was Evon Meckler. It was a packed house at the Sonora Opera Hall last night. Ryan is a 2012 graduate of Kansas State University, and is preparing for her Masters Degree from Stanford University. She is the daughter of John and Jackie Ryan.

The next big Roundup event is Wednesday’s band review at Sonora High school, followed by the Calcutta on Thursday at the Sheriff’s Posse Grounds. A rundown of events can be found in the myMotherLode.com Roundup section.