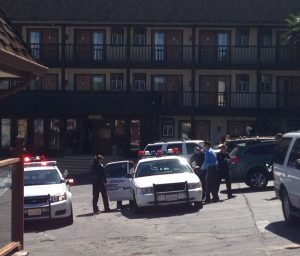 The incident happened just after noon at the Inns of California on Washington Street.  Sonora Police Chief Mark Stinson says two officers were at the motel following up on another case.  While there, management approached the officers and asked them to do a welfare check on a baby because the parents were acting “out of it.”  Once inside the room, the woman charged one of the officers and the man joined in, according to Chief Stinson who says, “While officers were trying to handcuff the man the female removed an officer’s baton from his belt and started hitting him with it.”  The woman was pepper sprayed during the incident.

Both were charged with child endangerment.  The female is also facing the charge of Assault with a Deadly Weapon on a Peace Officer.  The Police Department has not released the names of the two people arrested. Chief Stinson says it’s unknown at this time if drugs were involved in the incident.  There were no immediate reports of any notable injuries to officers. The video in the upper left hand corner shows the male subject being carried out by officers.

The follow-up news story with the names that were released is here.