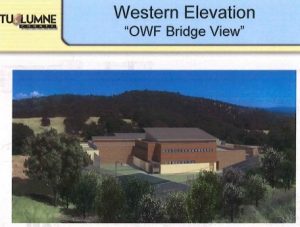 Sonora, CA — The Tuolumne County Supervisors have approved the final specifications, and are now requesting contractor bids for the construction of the Mother Lode Regional Juvenile Detention Facility.

It will be the first project at the Law and Justice Center property off Old Wards Ferry Road. The bid request was approved today, 5-0. The 24,630 sq. ft. facility will initially have 30 beds. There will be housing, classrooms, a day room, kitchen facility and maintenance area.

The contractor bids are due back on February 19th. Engineers are estimating that the construction portion will cost around $14-million, and the total cost is upwards of $20-million. $16-million came in the form of a state grant. Deputy County Administrator Maureen Frank says the goal is to have the facility open and operational by August 20th of 2016.