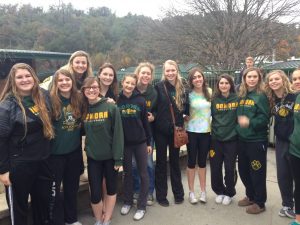 Sonora, CA — A victory lap in downtown Sonora this afternoon for the State Champion Sonora Wildcats Girls Volleyball Team will cause some parking restrictions for motorists.

There has been a slight time shift for when the roads will close and reopen for the parade, which is being held, rain or shine.  School Street, between State Route 49 (Washington Street) and Snell Street, from approximately 1:15 to 2 p.m. The weather forecast currently calls for scattered showers until tomorrow.

The Sonora High School girls volleyball team won the Division IV 2014 CIF State Championship in Southern California on December 6. The victory came after winning the NorCal championship against Notre Dame of Belmont, 3-1, on December 4. The state championship game was won in the fifth match with Alta Loma 15-8.

No parking will be allowed on Green Street between Yaney Street and State Route 49 (Stockton Road) between 1:15 and 2 PM.

For information Sonora High School has released regarding the event you can click here.  Sonora-Volleyball Parade